Photo courtesy of AFP/Getty Images Driving beyond South Africa’s Limpopo province, into the village of Chivadini, people and grassland are scarc... 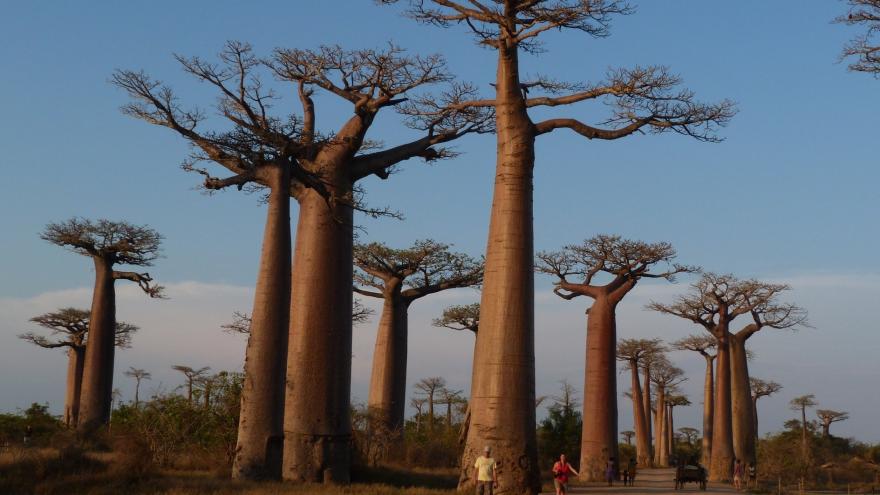 Driving beyond South Africa’s Limpopo province, into the village of Chivadini, people and grassland are scarce. But the oldest living organisms in Africa — baobab trees — are abundant.

These spectral behemoths blend into the Saharan countryside and have been an icon of the African savannah since millennia.

As the oldest seed producing trees in the world, their resilience — some are more than 2,000 years old — have earned them many names in myths, legends and folklore.

The baobab has been called the tree of life, the monkey bread tree and the upside down tree — owing to its fat trunk with roots meandering toward the sky.

But these strange looking giants are dying.

Some of the oldest and biggest baobab trees in southern Africa have died recently, and it may be due to climate change, according to a 2018 study published in the journal Nature Plants.

Some of the trees located in Zimbabwe, Namibia, South Africa, Botswana and Zambia dated back to the times of the ancient Greeks.

Researchers found that nine of the oldest 13 baobab trees and five of the six biggest ones have partially or completely died in the past 12 years.

The baobab tree, can live to be 3,000 years old, and can grow as wide as the length of a bus, according to the website of Kruger National Park in South Africa.

Given their age, the trees have withstood conditions often harsher than what they faced today.

“Over the last 1,000 years in Southern Africa the baobabs have endured way worse droughts than we’re enduring, and they’ve had much wetter periods,” said Stephan Woodborne.

In Johannesburg, where he is senior scientist at iThemba labs, Woodborne uses accelerator mass spectrometry, a form of radiocarbon dating, to determine the ages of these trees.

“When you look at the locations where these millennial and very large baobabs have died, they’re all located in Southern Africa. It’s not baobabs in general. It’s only baobabs that are at the southern margin,” said Woodborne.

“We suspect that the demise of monumental baobabs may be associated at least in part with significant modifications of climate conditions that affect southern Africa in particular. However, further research is necessary to support or refute this supposition,” the authors of the 2018 report wrote.

Baobabs often have hollow trunks. In the past humans have used their massive internal cavities as storage houses, prisons — even drinking dens.

For more than two decades, the Sunland baobab in South Africa was a popular attraction where tourists could order a glass of wine from a bar built inside the tree’s more than 1,000-year-old hollow trunk.

That is until last year when the tree split, following earlier breaks in 2016.

“It was 4 o’clock in the morning and we all woke up thinking a jumbo jet had landed in the garden. A few minutes later, 10 minutes later, then the big crash happened,” recalled Heather van Heerden, who owned the bar inside Sunland baobab and on whose farm the tree stood.

“When the tree collapsed, I just felt absolutely devastated and so sad, like a part of my soul had collapsed too.”

Before its partial collapse, the Mooketsi baobab, as it is also known, was thought to be the biggest baobab in Africa.

In 1993, when Van Heerden and her husband cleared out the hollow center of the tree, they removed compost buildup to uncover the floor about a meter below ground level.

In the process they found the remains of early Dutch settlers and evidence of bushmen.

“There was a bushman bed in here when we hollowed out the inside,” said Van Heerden.

In Limpopo, the Glencoe baobab, was thought to be the largest living baobab. Its gargantuan trunk measured more than 154 feet until it split in 2009.

It’s still uncertain what is driving the baobab deaths. But Woodborne believes that climate change is the major culprit.